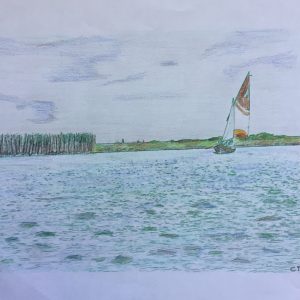 Four friends and me set sail in a late fall morning to explore the area on the South side of the industrial port of Venice called ‘Casse di colmata’ (Reclaimed land).

They are semi artificial areas built in the ‘60s as the result of the excavation of the Petroli Canal. They were created with the idea to enlarge the industrial area of Marghera but with the approval of ‘Legge Speciale per Venezia’ – Special Law for the Venice lagoon the project was abandoned and they were rewilded.

They are now sites of great naturalistic importance. 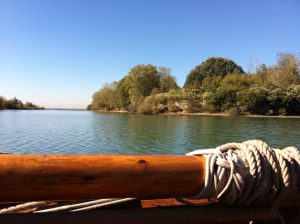 Sailing on a parallel route with the Petroli canal we saw several cargo ships and ferries entering and exiting the port of Marghera.

It is in reality the mouth of an ancient river canal, one of the many that flowed into the lagoon in the past times.

We saw mud and sand banks on both sides as we entered the area.

As soon as we passed the crowded Petroli canal it was like being another world; no sign of people unless for some fishermen boats in the distance and the skyline of Marghera behind us.

As we entered the area we saw flocks of birds everywhere and the banks turned into ground covered with woods. 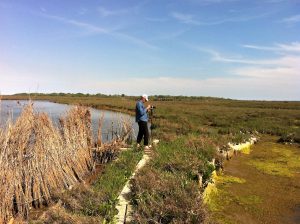 Sailing through canals we reached the Southern East point of the site.

There is a mooring spot where we stopped for a simple boat lunch with bread, cheese and salami and of course a good bottle of red wine. 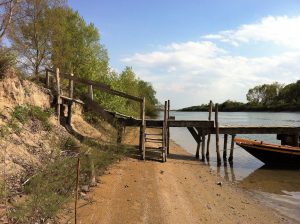 The lunch ended with a nice moka coffee brewed on a camp fire.

We explored then the nearby wood to collect some mushrooms and wild herbs. As the tide was right we also tried to find some mussels.

Time to go back quickly arrived and the breeze was too gentle then that we had to row a bit to be sure to land before sunset.

On the way back we explored new canals and passages; yes! Just as a way to have a sort of an adventure… and only a few miles from home. 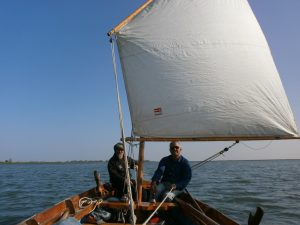