What ’s better than cooking a fancy recipe in a rainy day of April, patiently waiting the warm and sunny days of Spring? Easter is behind us, but there is always a good reason to prepare a nice dinner.

Once again we will make something that shows the melted culture of Venice:  the VENETIAN SALTED COD (BACCALÀ MANTECATO or Stoccafisso) 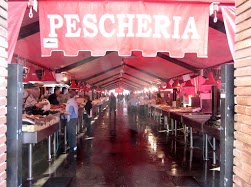 The salted cod appeared in Venice in the fist decades of the 15th century when a Venetian merchant , Pietro Querini came back from a disastrous trip in the North. He left with tons of wine barrels intended for the noble families of Flandres but wrecked near some Norvegian islands and discovered there this strange and tasty fish called stokvis. Back in Venice it took almost a century to the inhabitants – used to the fresh fish of the Adriatic sea – to adopted this new food. But, once adopted, the baccala became one of the most famous fish of the region.

n Venice a Confraternity was also established for the protection and spread of creamed cod in 2001!

The traditional recipe in the area of Venice is made with milk and is very easy and tasty. 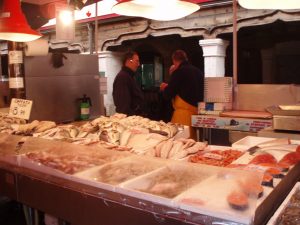 start by soaking the stockfish for at least 24 hours in soaking water changing the soak frequently. Then cut it into pieces 2. Place in a pan covering it with cold water and 150 ml of milk 3, lightly salt and bring to a boil, until it is well cooked and tender (if necessary, leave it 10 minutes longer). Drain the cod and clean itdepriving it of the bones and the skin, then reduce it into small pieces and place it in a bowl. With a wooden spoon (or in a planetary mixer), vigorously mix the cod, adding the oil as in the preparation of a mayonnaise. You will get a compact and homogeneous cream, with a shiny appearance and with a few whole pieces. Season with salt and pepper and add chopped parsley and garlic 7.

You can serve the creamed cod with crunchy polenta croutons as the Venetian people does!