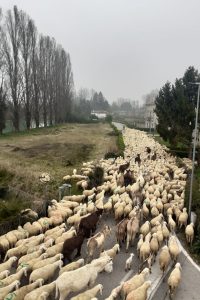 I was 7 when I first saw a flock of sheep in the streets of my city. We had just moved in Padua from Venice and, until then, my closest knowledge of animals where limited to cats, dogs and pigeons (not counting fish, of course)

According to my primary school comrades, that turned very exited days before the event, the transhumance was a very important moment in the live of our neighborhood. I clearly remember standing with my older brothers at the balcony at the second floor of our apartment observing dozens and dozens of sheep guided by one or two shepherds and their dogs. The smell, the incredible noise, the unusual vision of the streets full of animals instead of people and cars: that’s what transhumance meant to me at that moment.

It was only many years later that I really understood the historical and traditional meaning of such an event. The word transhumance comes from the Latin words trans ‘across’ and humus ‘ground’. 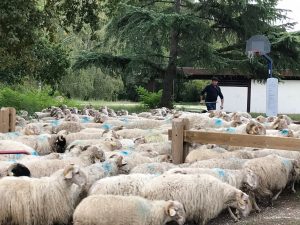 In the words of the Unesco « the transhumance-  the seasonal droving of livestock (…) migratory routes -, is a form of pastoralism. Every year in spring and autumn, thousands of animals are driven by groups of herders together with their dogs and often horses along steady routes between two geographical and climatic regions, from dawn to dusk »

Transhumance has been practiced around the world since animals were first domesticated but  had dramatically declined starting in the XIX century.

It’s only in the last decades that the interest for this practice had grown again. Many regions in Europe have acknowledged vertical (to and from the mountains) and vertical (plain to plain) transhumance as  intangible heritage of a territory. In Italy the transhumance was registered as Unesco intangible cultural heritage last December and France should be recognized next year. 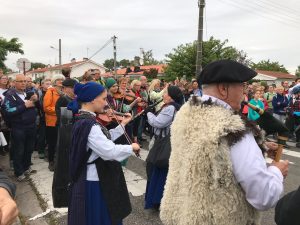 In a misty morning last autumn I had the amazing feeling of going back in the time following for a few kilometers in the suburbs of Bordeaux a flock of sheep moving from the basque country . They had spent the spring and the summer in the high pastures of the Pyrenees and were returning to their winter shelters in the valley.  The souvenirs of the noise, the smell, the unusual vision, came immediately from my childhood. I had a wonderful time sharing a moment of the tough life of the shepherd, their traditions and culture. Transhumant shepherds  have a thorough knowledge of the environment, the ecological balance between man and nature and climate change: it is in fact one of the more sustainable and efficient breeding methods that they transmit to their children. 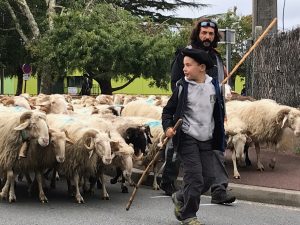