When you grow up in Venice, words as Lazzaretto, plegue, quarantine are part of the common language; Nothing strange. History is in day life in our city.

But after a year of pandemic these terms are familiar to everybody. What you probably don’t know is where they come from.

Follow us then, in the heart of the health policies of the Venice Republic.

Venice, as a city of merchants, crossroad of people and merchandise from all over the world, had to deal very often with contagious diseases. We witness the end of every major plague in the churches such as the “Madonna della Salute”, or the “Redentore” and, of course, with the two “Lazzaretti” of the city.

Once again the Serenissima Republic of Venice shows its modernity and its capacity for resilience reacting very quickly to the spread of the these diseases.

In 1423 the Venetian Senate, the first in the world, decided to create a place of isolation for those suffering from the plague. The term “Nazaretum” and then Lazzaretto derived from the name of the island, dedicated to Santa Maria di Nazareth (probably also for the nearby island dedicated to San Lazzaro).

In 1468 a decree of the Senate of the Serenissima established on the island a Lazzaretto with contagion prevention tasks, called « Novo” on the island of “Vigna Murada”, near the port of Lido.

Located at the entrance to the lagoon, three kilometers north-east of Venice, the island since ancient times has probably had a strategic function in controlling the waterways towards the hinterland. Archaeological finds testify to the human presence at the Bronze Age, while the first written document dates back to 1015: a notarial deed in which the island is called “Vigna Murada”.

The island became a place of stand by: 40 days of waiting and control, the “quarantine” was put in place for ships arriving from the various ports of the Mediterranean, suspected of being carriers of the disease. To make the health facility efficient, many buildings were built including large canopies called “teze” for the purging of goods.

Actually only the island of Lazzaretto Nuovo is open to the public in some days during the year.

We can reach the island in a traditional boat sailing the canal of the lagoon departing from Venice. 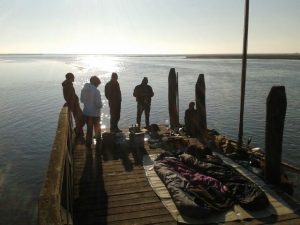 We embark in the morning and land in late afternoon in Venice and we sail around the city.

The itinerary itself is amazing, wandering around most of the typical landscape of the lagoon.

On the island, the visit is run by one of the members of the archeological association that works there.

History, curiosities, tales but also the routine of the archeologists are the focus of the visit.

In some special occasion  during the year there the visit last more with events and feasts. We can experience not only archeology and history but also biology and botany. In fact there is a path all around the island where we can see the “barena” – the sand/mud bunk – and its life with plants and birds. During these days simple lunch it is organized in the place.

Otherwise we can land on some other islands: Torcello, Burano, Mazzorbo, Vignole, Murano; to have lunch in a trattoria or restaurant.

The visit of the island of “Lazzaretto Vecchio” it is normally possible only in some days during the year. 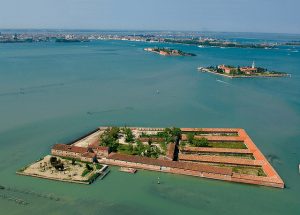 We can organize our private visit of both the islands and in the same day if the visit doesn’t interfere with some of the archeological excavation campaign.

Check regularly our website or leave your email and we will keep you posted on the events and dates open for a tour!