Is there a better time to start living Venice again than the Feast of the Redentore? A date full of symbols. Getting together again, the defeat against disease, the life that resumes its course, a city that starts over. There is all that this year at the Redentore.

A commemoration that, as always in Venice, comes from afar.

netians created a barque bridge between the Zattere shore and the Giudecca island where the church was built. Since then, every third weekend of July, there is no Venetian who misses this moment of joy, religious and popular fervor, which as always in Venice meet and mingle.

Families and groups of friends leave by boat in the late Saturday afternoon to position themselves at Punta della Dogana, a place intended by the municipality to attend the fireworks. Traffic is blocked all weekend along the Giudecca canal. You eat (and drink) on a boat. The dishes are typical of the simple and tasty Venetian tradition: sardines in saor, bovoletti, watermelon, accompanied by a good glass of prosecco or other simple table wines. Then, the climax: around 11 p.m. when the darkness is finally intense enough, the fireworks begin. Also shot from the lagoon, from the barges in the San Marco basin. It is a unique moment, because we find ourselves – in the boats – under a rain of lights and colors.

In past years, tradition wanted that after the fires, the celebration continued on the beaches of Sant’Erasmo with bonfires that illuminated the cheerfulness until the morning. Unfortunately this part of the Redentore is now only a memory, since it is forbidden to make fires on the beaches!

For the more fervent, the appointment is therefore the next day, Sunday morning, to attend mass in the splendid Palladian church, after crossing the bridge of boats between the banks of the Zattere and the church of the Redentore in Giudecca. 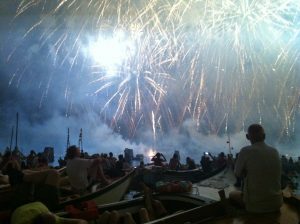